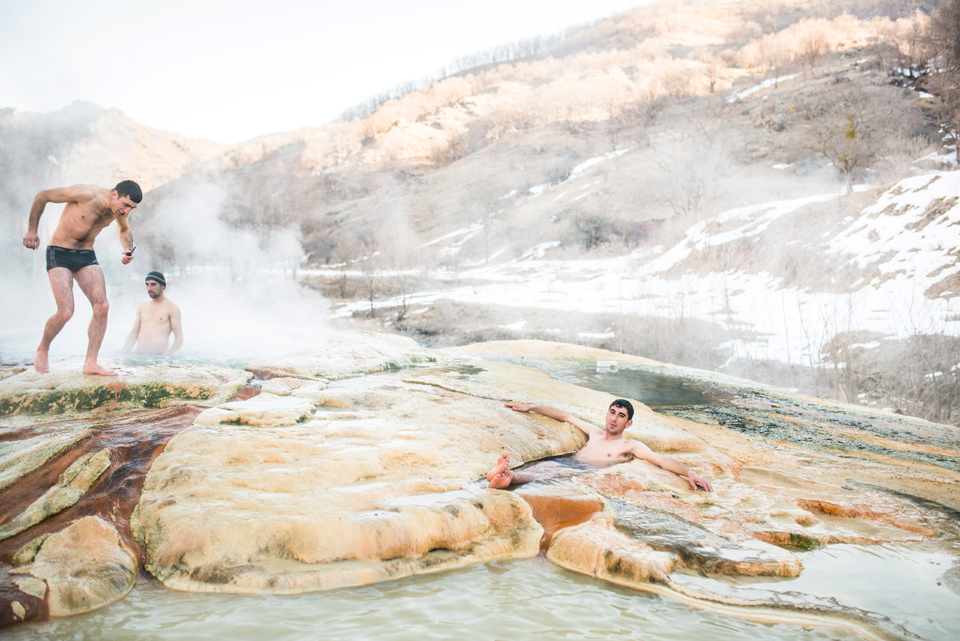 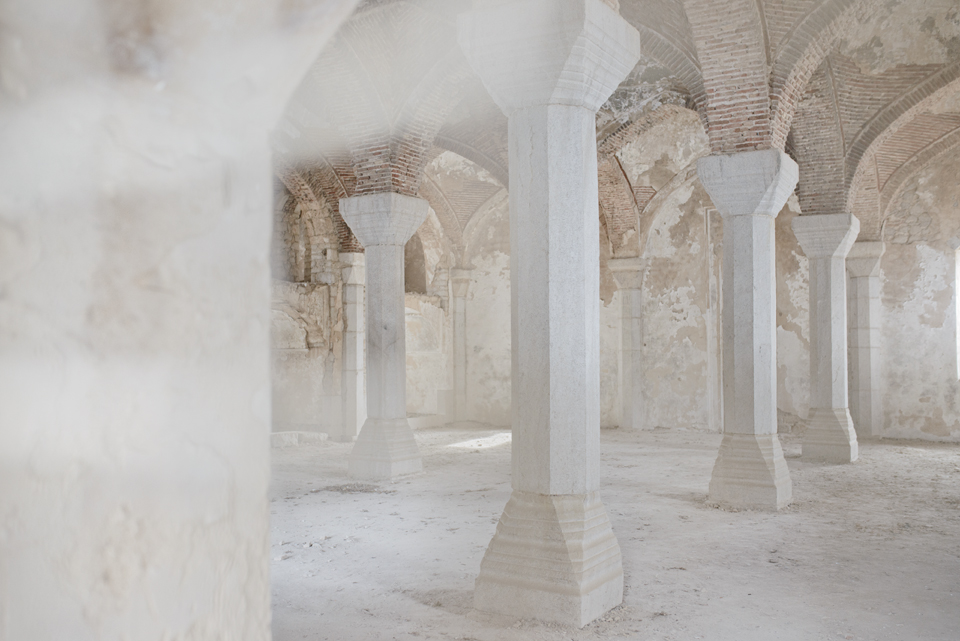 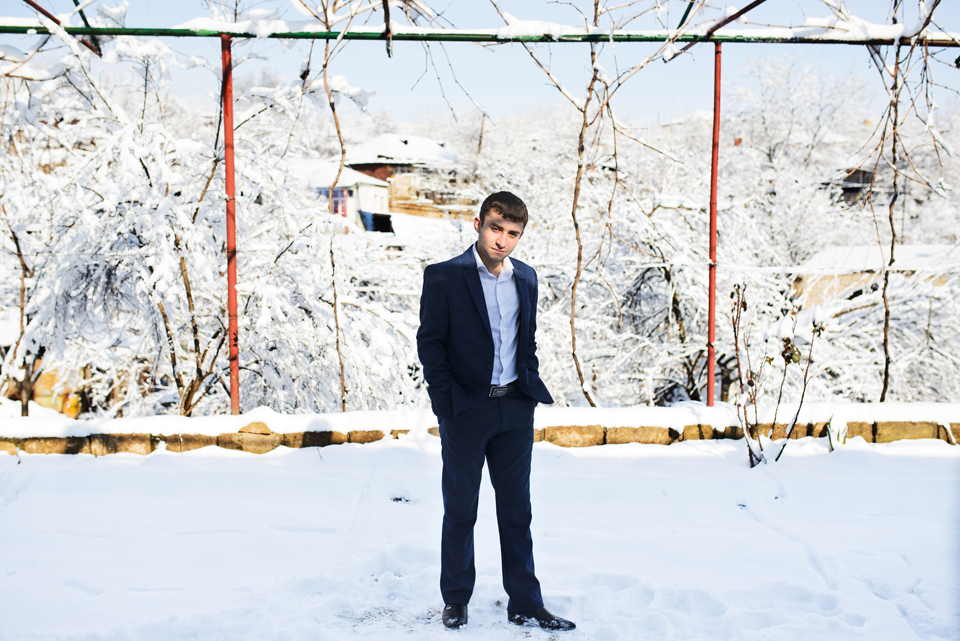 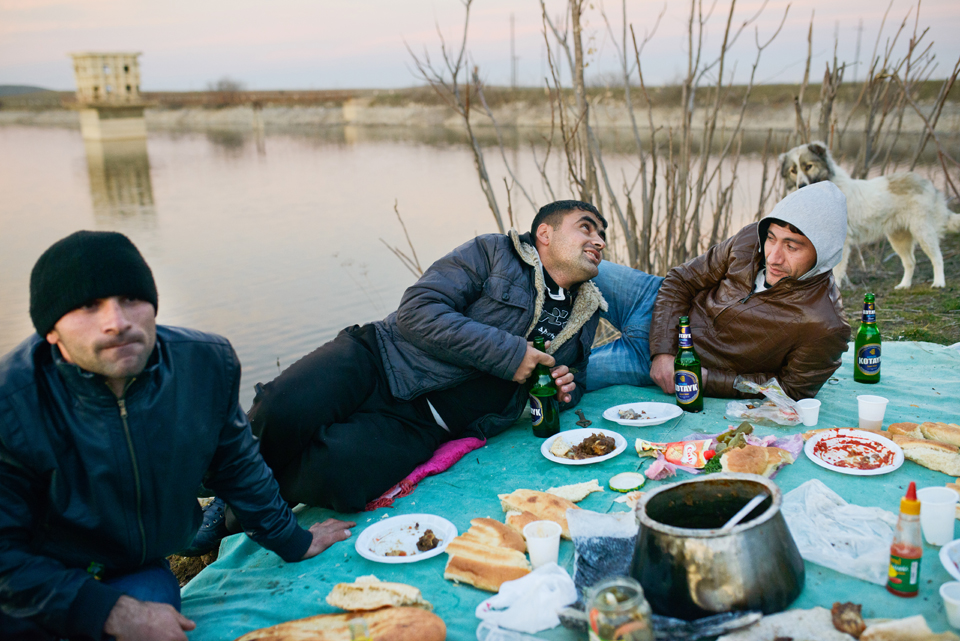 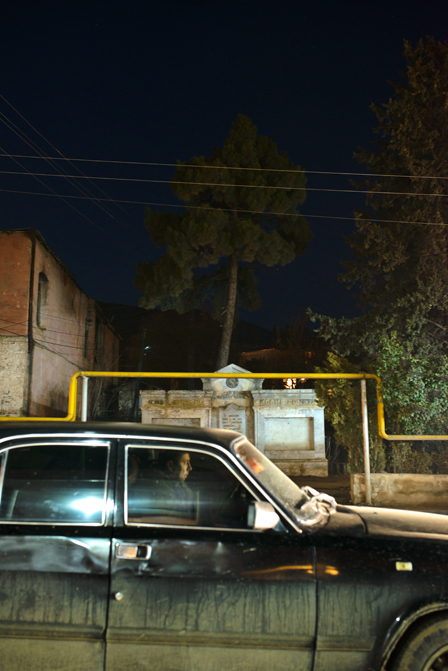 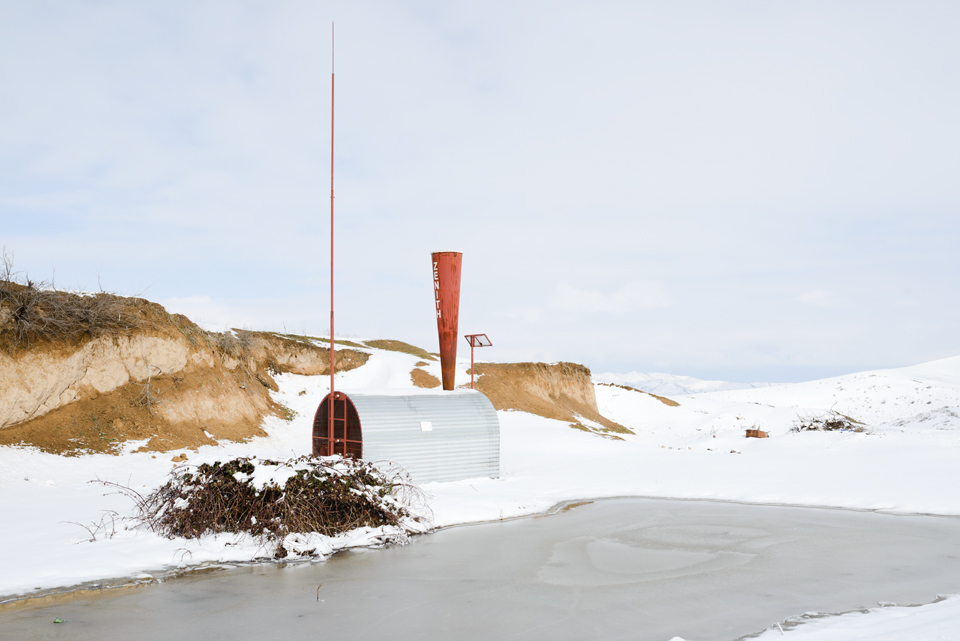 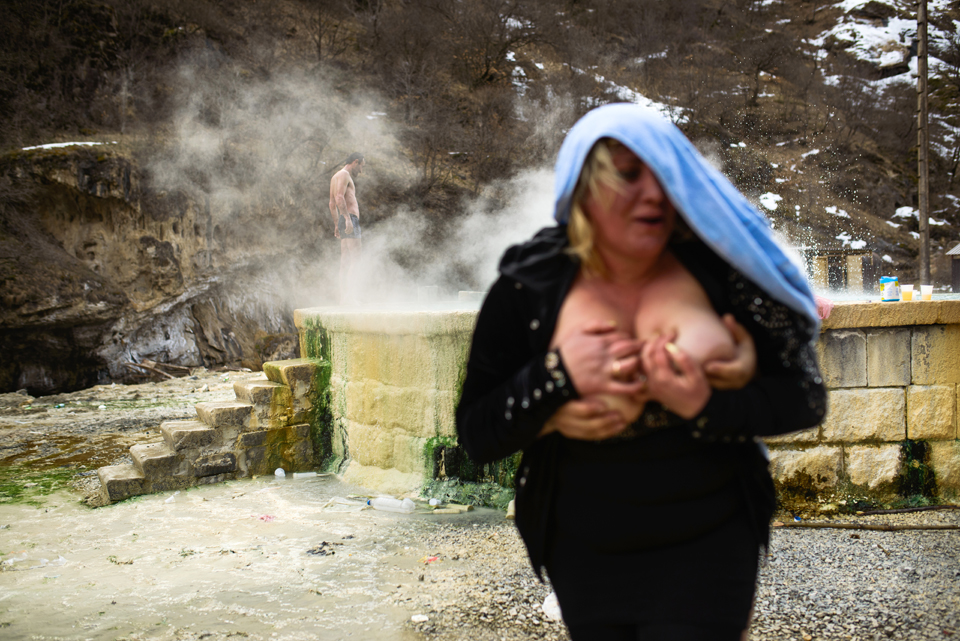 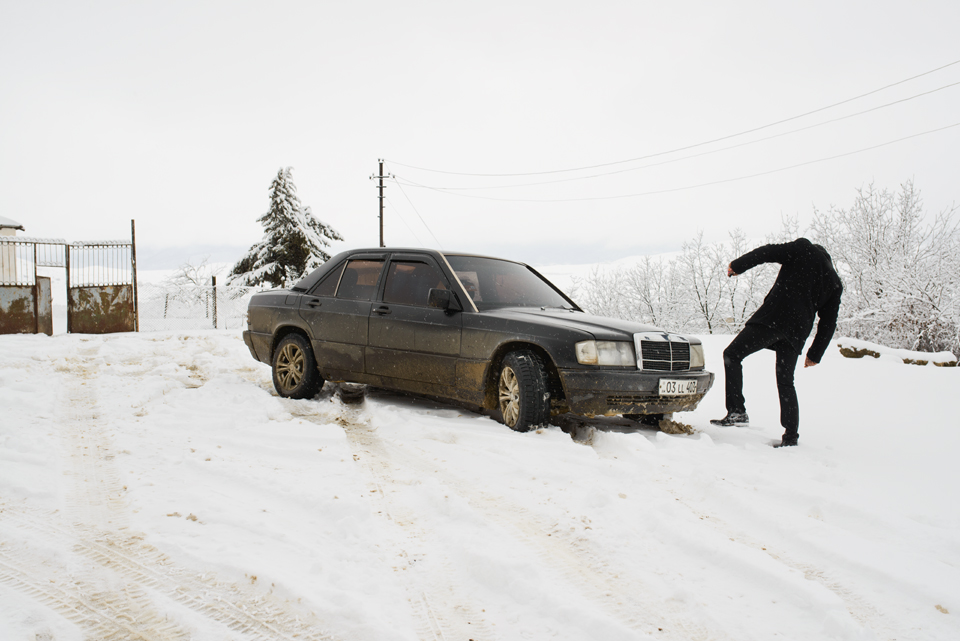 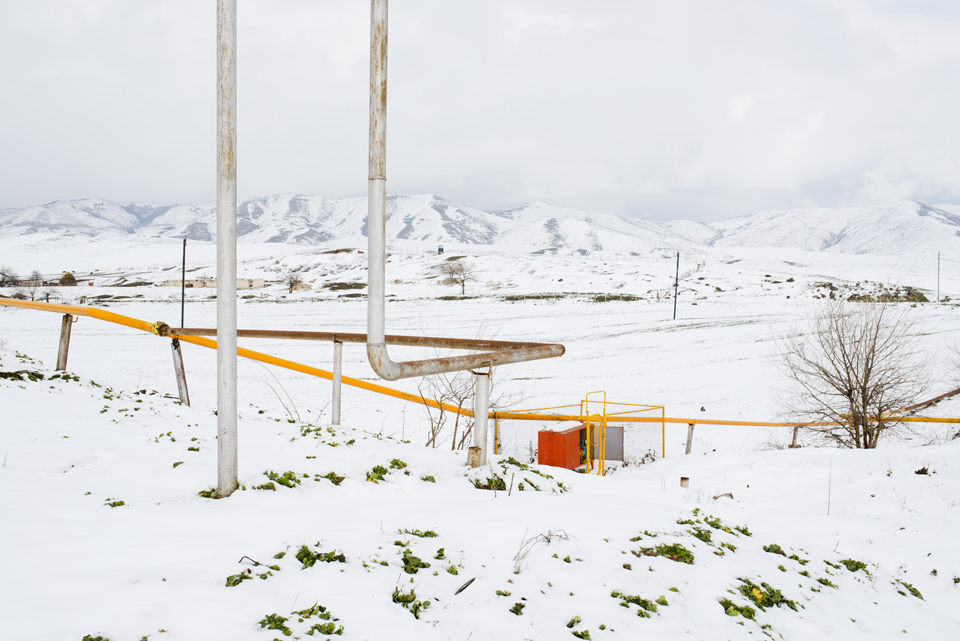 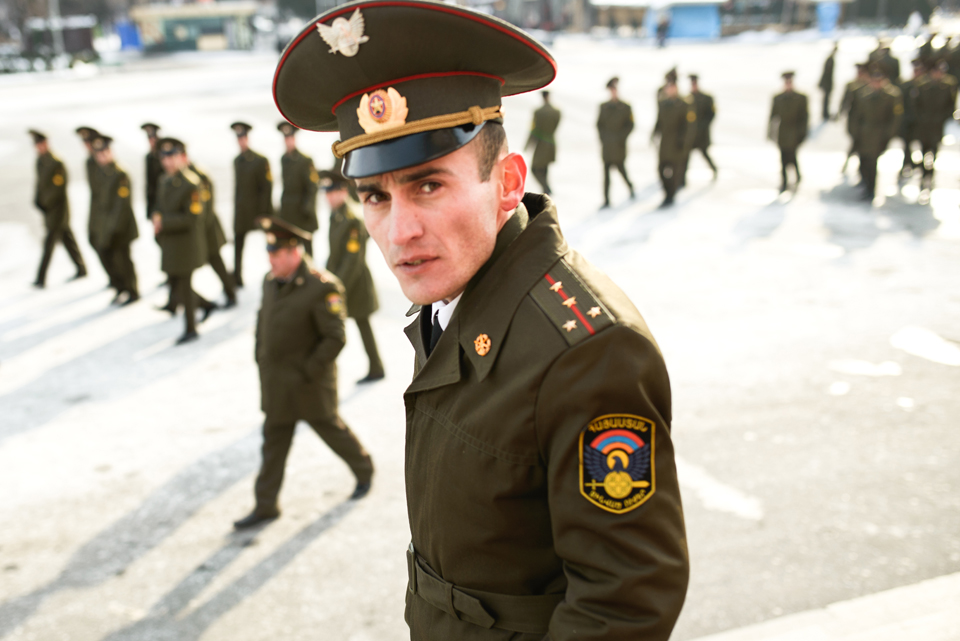 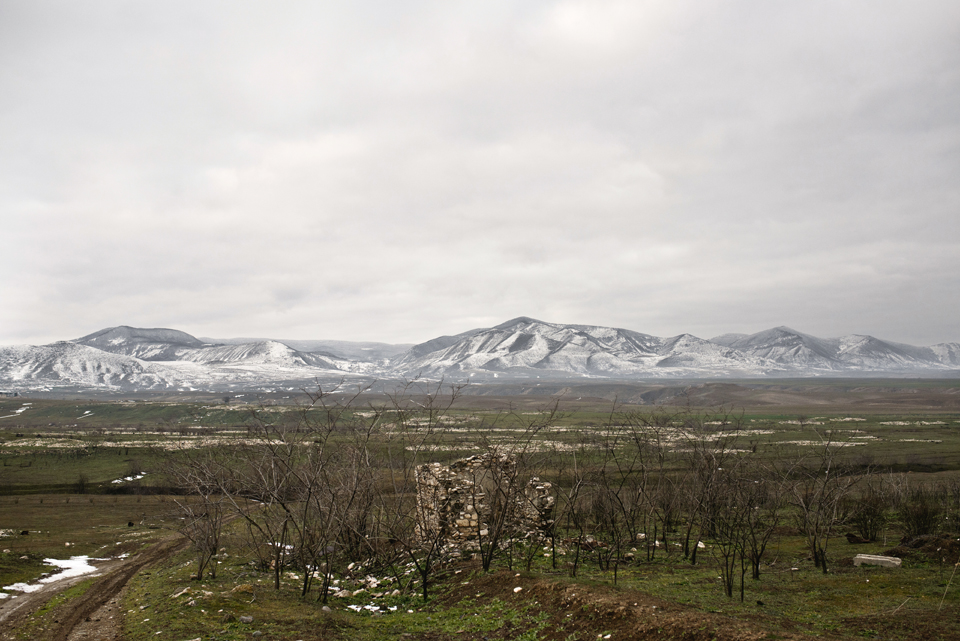 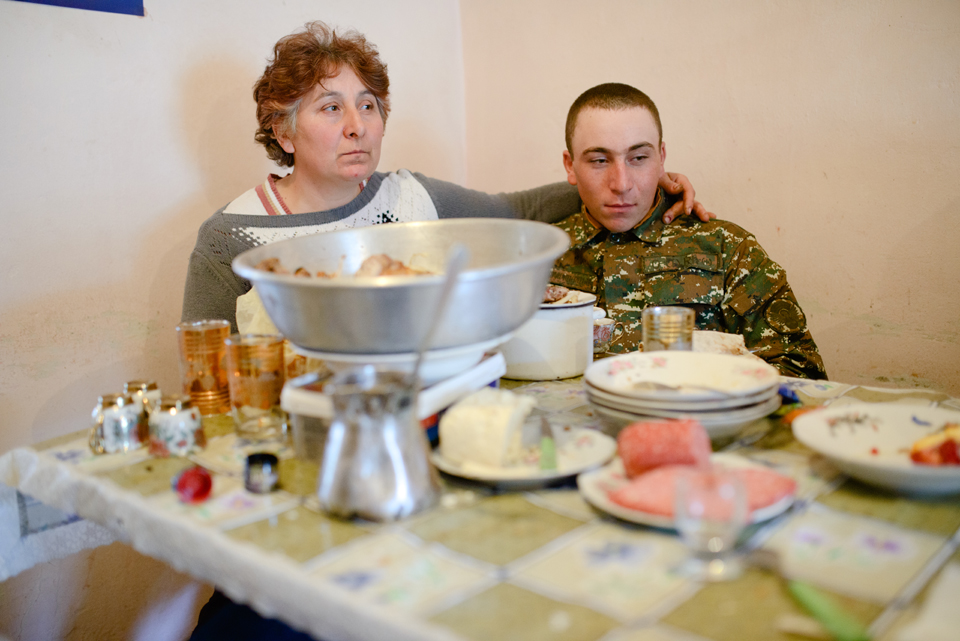 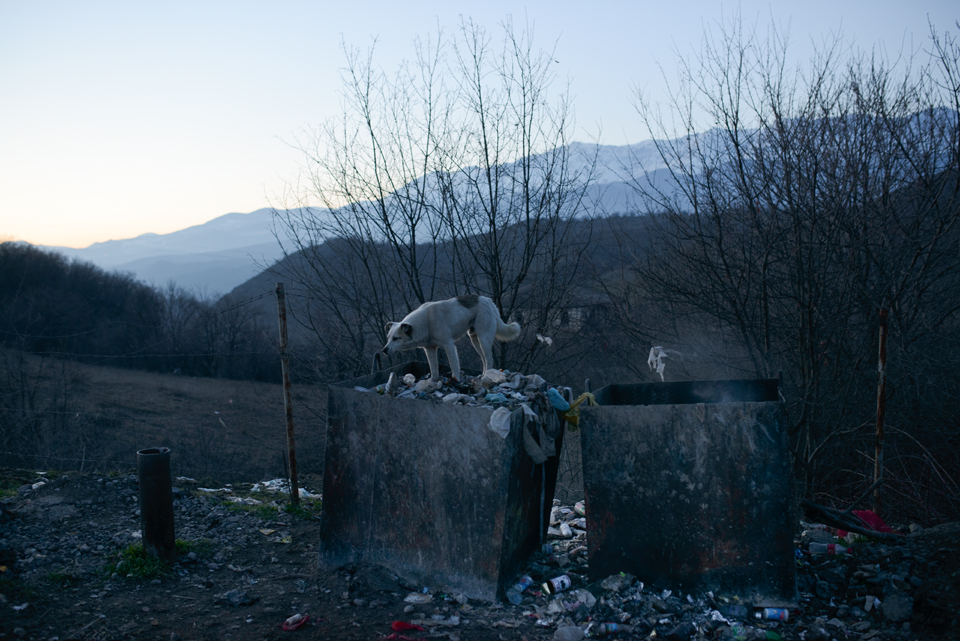 Fertile grounds to the East of first hills of Smaller Caucasus never belonged to Armenians. Similarly to other parts of Nagorno Karabakh Republic, plains like this one, along Askeran – Martakert road, were inhabited by Azeris. Although today Armenians are in control calling it a ‘buffer zone’, Azeris describe it with the term ‘occupied territories’. In 1993, after a series of military gains over Azerbaijan’s army, Armenians did not hold their men at the foothills where they comprised an ethnic majority, but moved forward. They cleared a stripe of land of its Muslim inhabitants, forcing them to flee and leave their homes, fields and cities behind. An area several kilometers wide, over a hundred kilometers long, is comprised of ruins of homes, villages, and monstrous ghost towns. It is this moonlike landscape where young men spend their compulsory military service pointing guns at their Azeri counterparts. For twenty years this situation has been stable, with a gun firing on one side or another form time to time.

Karabakh security forces try to keep these landscapes along Azerbaijan border out of reach of visitors, not only because of the proximity of unpredictable front line, but also because the lands conquered by Armenians give clear idea on how recent is the history of ethnic cleansing committed in Karabakh at a scale that is hard to imagine. They remind of a fact that Azeris have very valid reasons to try, one day, to recapture ruins of their cities; Agdam and Fizuli.

In Fizuli, Armin explains, what was valuable was everything that could be extracted and sold. The first came home appliances, after these; windows, doors and pipes. Today, when Fizuli infrastructure has been reduced to rocks, these rocks are used by construction companies. Armin works in one of them, collecting, transporting, and utilizing stones at construction sites across Karabakh.

At the same place, after an unsuccessful hare hunt, several men from neighboring Togh village party by the banks of defunct hydropower plant reservoir, surrounded by remains of Fizuli city. A small airport serving as regional transport hub before the war, and Soviet monuments, complete the scene. One of the men explains in broken Russian; ‘what you see are terrains we bravely grabbed from Azerbaijan…’ corrected by a second man; ‘not grabbed, but conquered, or recouped in retaliation for Azeri atrocities, committed at Armenians on incomparable scale. The point is that these are lands we deserved and earned, and that we will defend’.

Crowds of drunk fathers roam the streets of Hadrut, celebrating an oath marking the beginning of compulsory military service of their sons. For two years they will be going grey while their kids will sit in trenches pointing guns at Azeri side. In one of improvised cafes, serving usually as barber shop or butchery, family parties in a joyless manner. Toast bidding starts, and since Armenian toasts are elaborate, they give room to share views on Azeris, Turks, their mothers, sisters and anyone willing to treat them as human beings. Paranoid politics talks, uncles’ advice on military adventures make the atmosphere dense enough to prevent Armenian hospitality from tolerating an outsider any more. In another similar place a family has much less of an idea how to bear the situation, sitting silent, waiting for an evening to come that will allow them to return to Yerevan, or anywhere in Armenia in other cases. Those who could not afford hiring a driver stay in cheap hotels, sustained in Hadrut thanks to proximity of the military base, largest and the most important in Southern Karabakh.

Arthur’s mother works in a grocery store earning less that 150 $. Prices in that store, due to an isolation of the region and large distance lorries have to travel, are higher than in Armenia. That means it’s impossible to earn a living doing a simple job, a hairdresser, a butcher, or a cook. Every usual occupation makes sense only if there is a member of the family abroad, supporting everyday expenses back home. Reasonable salaries are in the army only.

Arthur picks me up from the store, shares homemade vine and introduces me to his friends; a corporal, a contract soldier, policeman, intelligence analyst. All of them after compulsory two years of service decided to stay in the forces. They unanimously agree, 9 out of ten of their friends do the same. There is no family in Chartar without at least one member in the military.

Karabakh army consists of approximately 25.000 men, 18% of the Republic population. If you add police, security service and remaining uniformed forces, the picture of a remote, militarized region drawn by young soldiers – seems reliable. Only in  the army, in their opinion, one can afford to stay home with their family instead of emigrating to Russia.

Thermal springs in remote Northern parts of the Republic are a common tourist destination, especially in winter, when huge mosquitoes are not making it impossible to dive into a hot pool. Here, I was sure, I will meet people looking for a few hours rest, like myself, the ones like farm workers, emigrants to Russia, spending their holiday here. A little further to the West, in another area, in hot water I sit among sad special forces making a break in their border patrol, two policemen and a chief of local security services observing the whole scene from behind a car. I’m not allowed to photograph, since the view of military in a tub or a police car next to a grill could be considered a security breach. At that moment I am already well aware of strategic significance of raw material transfer line in the form of home gas pipeline, of military equipment disguised as an old Lada or military personnel embodied in a father saying goodbye to his son, all of which cannot be depicted. It is allowed to spend the night in there, but with caution. Azeri saboteurs can be encountered, just like the ones last year. They asked, sniffed, looked for something. And you, yourself? Are you sure you’ve not just visited Baku? That you’re rally not Turkish? That you don’t greet your mother As-Salaam Alaikum? Maybe you’ll show your documents anyway?

I selected these scenes of daily life in Nagorno Karabakh Republic because I believe they illustrate precisley the uncompromising routine of daily life in this area, in a moment preceding a large scale outbreak of violence that took place in early April 2016, several weeks after this documentary was completed.

Mountainous region of Nagorno Karabakh has been ruled autonomously since 1994, when Armenians won de facto independence for these areas in a bitter war against Azerbaijan. Armenian support has sustained the breakaway republic economically and militarily ever since. An unsettled conflict is considered ready to blow any moment, like it happened this year.